Note to self: don't make bread dough and then leave it in the fridge all week.

I remembered it this morning and bunged it in the oven. While it was baking, the kitchen smelled like a chip shop from the amount of acetic acid vapour the bread gave off.

Pity, because it has a fantastic crumb and lovely texture. It's just really sour.
Posted by Barm at 22:15 No comments: 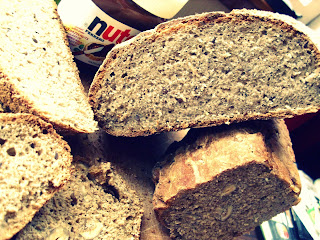 I should have posted this yesterday but didn't get around to it. This is the result of throwing two doughs together at 3am the other night. Wheat loaf with 25% and caraway yadda yadda, as above, and a smaller hazelnut and stout loaf using my XXXS beer instead of water. I've decided that after nine months the XXXS isn't ever going to be that good (it was only the second beer I brewed) and will now go into bread and marinades instead of down my neck. It makes pretty nice bread though.

Do I have time now to make another strong stout in time for drinking in the winter? Sure I do, it's only August.
Posted by Barm at 15:09 No comments: 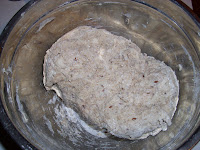 I couldn't sleep. This is weird for me because I can almost always sleep like a log.

My mind was racing with thinking about baking and brewing (shut up). Eventually I had to get out of bed and go and make some dough. Partly out of solidarity with Andy from the loaf who has to do it at three in the morning, and partly because I'll have no bread tomorrow if I don't. 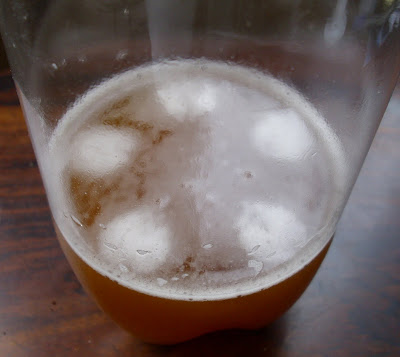 This is a yeast starter. See the perfectly symmetrical blobs of foam? Is the yeast telling me something? Should I make Yorkshire bitter with this yeast?
Posted by Barm at 14:31 2 comments:

It's only since I've been homebrewing that I've really appreciated what a difference varying levels of carbonation can make to a beer. All my beer is bottle conditioned so the carbonation level depends on how much sugar I add at bottling. I rarely know exactly how much beer is in the bottling bucket and just add sugar by a mixture of experience and a calculation I did a long time ago (Both these practices are on the list of things to be fixed in my brewing process).

Flat beer is awful. It gives the beer a terrible acidity, and drinking it becomes a chore. On the other hand, too much carbonation is even worse. I realised that the reason I don't like some bottled Belgian beers isn't the beer itself, it's the fizziness. Hence I prefer to err on the side of under-carbonation, even if it means I have to dump the beer violently into the glass to get a bit of foam.

I'm drinking XX at the moment. It's got very low carbonation, just enough to form a head, the way I like it, though a tad more would be nice. Tremendous chocolate malt character, but light-bodied, not full like (what I think) a mild (should be like), with citrussy hops (Liberty). I tend to agree with those who say large amounts of US hops don't work well in dark beers. Also a bit of roastiness. Let's invent a ridiculous BeerTwat "style" for it. Oregon-style 60 Keller-Shilling?
Posted by Barm at 22:34 No comments:

The London Review of Bread

I was in London this week for the Great British Beer Festival, but man does not live by beer alone -- there's bread as well.

On Wednesday a friend took me to Franco Manca in Brixton Market. It is a splendid place. There's a clay oven in the back of the shop and about eight tables packed with people tucking in to the enormous pizzas that come from the oven. The pizza, made with a natural leaven, is soft, chewy and charred from the oven. The salads are even better than the pizza. 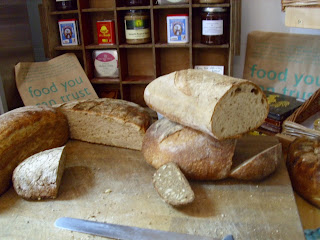 A couple of units down from there was Wild Caper where they also sell amazing looking bread (as well as boring stuff like olives and wine). They were nice enough to let me take pictures of their bread, even though we didn't buy any. I learned once I got home that the bread is also baked at Franco Manca; that's a hard working oven.

Borough Market, as everyone knows by now, is packed with food producers selling great stuff. At Flour Power's stall I bought a piece of rye levain bread (these things are the size of an LP record, or bigger, so they also sell half and quarter loaves). It's gorgeous, really rather sour indeed and with an underlying sweetness and chewy brown crust. It's the kind of bread you can just eat without anything on it. It seems almost a shame to hide it. 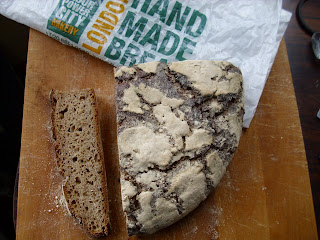 Another interesting loaf they sell is one which is just 400 grammes and is slashed so that you can cut it into seven slices. The story is that this slice was a day's bread ration during the Second World War. A sobering thought. I know that some people today don't eat much more than 400g of bread a week, but I don't think that Londoners in the Blitz had the option of filling up on crisps and frozen shepherd's pie instead.
Posted by Barm at 12:14 No comments: 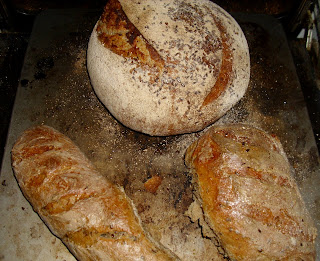 I haven't baked for a week, and even resorted to buying bread at the weekend. I had a tasty, tangy baguette and a dull poppy seed roll clearly made from cake flour from different stalls at the market. Saturday night I relaxed and fed my sourdough, and by Sunday evening I had this:
Posted by Barm at 15:36 No comments: