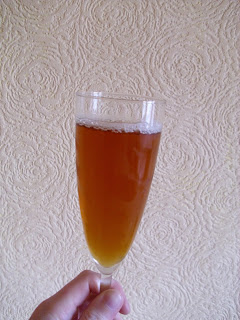 I usually write my own recipes for my beer; not that I'm a genius at formulating recipes, it's just that I like to keep things simple and much of the time I barely even think of them as recipes. I can't remember why exactly but I decided to brew an old recipe instead. If you go over to Shut Up About Barclay Perkins you'll get a load of old beers excavated directly from the archives, along with a shedload of other historical information—everyone interested in beer should read this blog from start to finish.

This makes things a bit tricky because the invert sugar syrup that professional brewers use is not available to the home brewer (the stuff sold as "brewing sugar" in homebrew shops is not the same thing at all). But they are all essentially a mixture of refined sugar and unrefined sugar in different quantities, so I attempted to fake it. 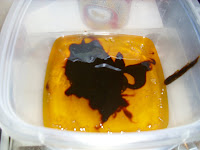 As I understand it, No. 1 is a light coloured syrup and No. 3 a dark one. I substituted golden syrup for No. 1 and for No. 3 I used a combination of three parts golden syrup to one of treacle. I might have erred on the light side with the treacle because it does have a very distinctive flavour and I didn't want it turning up recognisably treacley in my beer.

So my approximation of the recipe is:

Mash 45 minutes at 67ºC; I hate sparging so stopped sooner and ended up with slightly less wort at a slightly higher gravity: 1.038 as opposed to 1.034 in the original.

Hopping: 20g East Kent Goldings (5.8%) at 60 minutes and another 10g at 30 minutes. My hops were a bit higher in alpha acid than the recipe assumes, so I dropped the quantity a little, though it should still be a tad bitterer than the original. Yeast was White Shield which has pretty much become my house yeast at the moment.

The finished beer has an aroma and palate more reminiscent of light honey than anything else. Hops barely discernable, just enough to stop it getting that weird blandness that under-hopped beer often has. As you can see from the picture, it's a light amber and not very dark at all. This matches the expected colour from the recipe, so I'm not unhappy with it. There's no treacliness though, so I might risk increasing the proportion in the next beer I make with sugar.

What's it taste like? Well, I don't expect a 1950s mild to be that exciting, and it isn't. My friends liked it more than I did, though. But look at those ingredients. Damn, this is a cheap beer to make. I wish I liked it more.
Posted by Barm at 10:26 5 comments: Links to this post