… is roughly how long it took for my four 1.5kg loaves to be demolished. I was terrified that the bread was going to turn out damp and claggy, but it was fine. I should have made more. 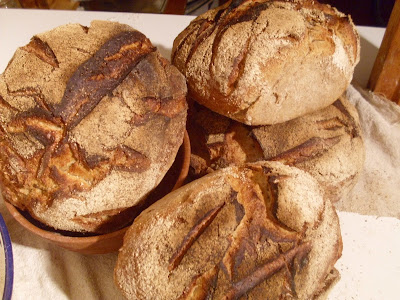 Today is Glasgow Harvest and I made some bread to take along. Everyone likes bread apart from anti-yeast nutters, so I'm hoping it will go down well. Making it also gave me practice in making larger batches of bread — I usually just do one or two loaves at a time, which is not really the most efficient way of using an oven. I decided to make a few light rye breads with a bit of rye flavour, but enough white wheat flour that the dough stays easy to work with.

As sourdough takes a long time, I had to start a while in advance. On Thursday I took the starter from the fridge where it had been languishing for a while, and refreshed it:

Then late on Thursday I stepped it up with more flour and water:

I ended up with 2300g of starter, as some inevitably gets left in the bucket, smeared on the walls, etc. It looked like a lot. Often I just make a straight dough with a small amount of starter, but didn't want to risk the finished dough not rising when it's supposed to. By Friday morning the sponge still didn't seem to be doing very much, but by the evening it was escaping onto the kitchen worktop.

Rather than calculate a particular percentage of rye, I decided just to add another 3kg of white flour to make the final dough. That meant I only had to figure out how much water and salt to add. 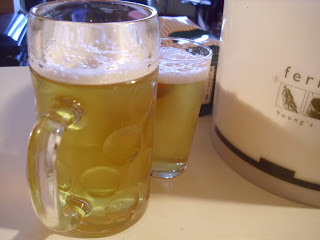 For a bit of fun, I used beer instead of water for the remaining liquid. It's only 3% and rather bitter. I wonder if anyone will notice?

As I’m of the school that believes in a minimum of kneading, 7kg of dough without a mixer isn't too bad. Just get your hands in, mix it up, let the dough itself do the work. Get it relatively smooth on the counter and it should look after itself.


Then just into the oven with it. I can’t wait to have some of this for breakfast.

You can buy jam for next to nothing, so why make it? Well, to use up a glut of fruit. To make jams that you can’t buy. For fun. And, well, some kinds aren’t as cheap as others. Some things like chilli jelly go for ££££ in posh delicatessens. I’m forever picking jars up, thinking “I could make this for about 15p in ingredients,” and putting them down again. Learning to make jam has thus been on my list of things to do for quite a while. Jam goes with bread, so it’s a good fit for the blog. And at the weekend I got my chance.

I wrote about Cookie on my beer blog some months ago. They do lots of cool stuff. Such as playing host to a jam making workshop last weekend. “Bring yourself and some fruit,” it said on the blog. So I did.

Pollokshields, near Cookie, is full of amazing greengrocers. I dropped past one and was looking for some reduced fruit. I struck lucky and found reduced strawberries — some punnets were already mouldy, but I got four big punnets that didn’t look too damaged. The total cost was £2. For 1.6kg. When we started cleaning and stoning the fruit I was amazed how good they mostly were. You’d be extremely lucky to get strawberries this good in a supermarket at full price.

When I arrived at Cookie people were already in the prep room busily washing and stoning a mountain of plums. Hrr hrr, juicy plums, fnarr. With about eight of us around the table, all the fruit was soon ready and we carried it upstairs to the kitchen. It looked far too nice to be made into jam, really. As well as plums and strawberries we had greengages and some raspberries and brambles.

Without much of a clue of what I was doing I was shown to the stove and instructed to stir some sugar until it melted. Typically, it stuck to the bottom of the pot and I had to start again. Slowly the sugar-covered fruit became a fruit-filled syrup, then a sugary, vibrantly coloured boiling mess as the fruit broke down.

What did people do with spare fruit before sugar became so cheap? In the fruit-growing regions of Germany, they ferment and distill it to make Schnaps (proper 40% Schnaps, not the sugary peach liqueur that goes under that name here). Lovely stuff it is too. That is illegal here unfortunately.

Some of the jam will be part of the jam wall at Glasgow Harvest on Saturday. To think a year ago I was looking around for Glasgow food bloggers to add to my blogroll, and could hardly find any. Now it seems everywhere you turn there’s some sort of social food project springing up. Hurrah for that.
Posted by Barm at 14:10 No comments: